Kayaking solo around Cornwall in 1975 I spotted a huge black fin beside my kayak. Just as I began to recover my composure, heart racing, I saw a second large black fin a few yards behind me. It took long moments to realize they both belonged to the same shark.

Soay Island in Scotland 1976… there are more the one, and the one I mean lies to the southwest of the Isle of Skye… was one of the places I visited when I first kayaked in Scotland. , with me there, described an elusive shark fishing factory; a place we never found because we didn’t know where to look and so explored the wrong side of the island. 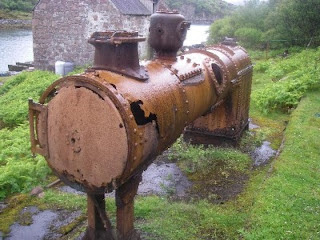 I returned this year 2007. (See photos). The ruins, rather gloomy and diminutive seen through the persistent rain, saw less action than once-owner anticipated. bought the island at the close of WW11 but by an oversight was not able to secure the lease for the commercial salmon-fishing. This left to ’s imagination how he might make a living there. On leave in 1944 and afloat in his 30-foot lobster-fishing boat, the “Gannet” Maxwell first caught sight of a basking shark; a large plankton-sifting type of shark once harpooned by Scottish islanders in small boats to harvest oil from the liver.

’s callous response to seeing this huge creature was to shoot at it. At war’s end he was well accustomed to death and killing, and with the light machine-gun mounted at the bow for shooting drifting mines he fired three hundred rounds into the side of the shark before the shark finally lay wallowing at the surface. As soon as his crew had made fast to the shark with a boat-hook, the shark took off like ’s in “a boil of white water”; the boat-hook flew from the water several hundred yards away, and they saw no more of that shark.

His own research revealed that very little was known about the basking shark when he embarked on his commercial venture to hunt the sharks for their liver oil. His bald plan was to cruise out into the Sounds, harpoon sharks and tow them back to Soay for dissection. The huge liver being the only part of value, each huge carcass would then be towed from shore to be cast adrift. It’s the start of a strange tale, which includes the demolition of the factory by a cyclone of 120 miles-per-hour winds in 1946, through to the dire situation of the huge “pickling tank”, designed to salt shark flesh, that took on a life of its own in the form of a sea of millions of writhing maggots; a situation that somehow calls to my mind the containment problems suffered at the Handford nuclear facility in Washington…

The venture failed and all was over by the end of the decade. I hope since then people have begun to view basking sharks though more kindly eyes. The ruins still remain, with concrete slipway and rusting steam winch. It is a place in which to shiver from the cold summer rain and relentless midges, a place strewn with fishing floats. There, around the stacked lobster pots is a quiet spot with an unusual tale hidden for the curious to discover.

Check out some photos on nigelkayaks.com

If you’re curious (and not too squeamish a reader), Gavin Maxwell’s book “Harpoon at a Venture” was released in London the year I was born, and makes interesting reading, although Maxwell is better known for his later work, including “Ring of Bright Water”, an autobiographical account in which he wrote about otters.